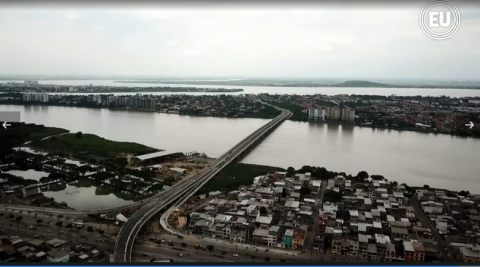 After taking down the platform used to inaugurate the Guayaquil-Samborondón Bridge, it was planned to open the viaduct for vehicle traffic at 6:00 AM today

The Municipal Transit Authority (ATM) sent 24 agents (in shifts) to direct drivers, according to Carlos Fernández, Head of Operations at the aforementioned Institute. He further noted that the officers were deployed throughout José María Egas Avenue and along stretches of the Narcisa de Jesús Highway, as well as at other points of confluence of traffic generated by the viaduct, whose inauguration took place a little after 5:00 PM.

Monsignor Luis Cabrera, Archbishop of Guayaquil, blessed the structure at 5:04 PM and then the Mayors Jaime Nebot and José Yúnez, the latter from Samborondón, unveiled the commemorative plaque. Before the ceremony, the two authorities toured the bridge.

In his speech, which closed the inaugural ceremony, Nebot said that the construction helps to connect Guayaquil, Samborondón, Duale, and Durán.

After giving details on the viaduct, the port city's mayor called for the country to come to national consensus.

In that context, he stressed that it is time for politicians to be mature and have good sense.

He apologized to the women present, saying that his words did not exclude them and noting: “Here, what is needed is a little bit of intelligence, heart, and courage to move the country forward and to make the government of Ecuador progress.”

Nebot reminded that the construction of the new bridge over the Daule River acts as proof that having a bad Central Government does not prevent the progress of a people who have good local authorities, referring to the previous government.

He also announced that on Monday, the 7th, construction of the Samborondón ring road/overpass would commence and that it is foreseen to be ready in July.

Yúnez stressed that the City Councils of Guayaquil and Samborondón respected the schedules and the budget set forth for the work.

From today on, drivers going to Guayaquil by means of this new stretch can take José María Egas Avenue, in the north of the city, and continue to main streets like Antonio Parra, Isidro Ayora, Rodolfo Baquerizo, and Francisco de Orellana.

Thus, the traffic of Samborondón –more concretely, that of La Puntilla– now also flows into Sauces 4 and not only into La FAE and La Atarazana, doing so via Pedro Menéndez Gilbert.

"This construction, which freely serves the community, will allow the economic engine that is Gran Guayaquil to continue to develop." José Yúnez, Mayor of Samborondón