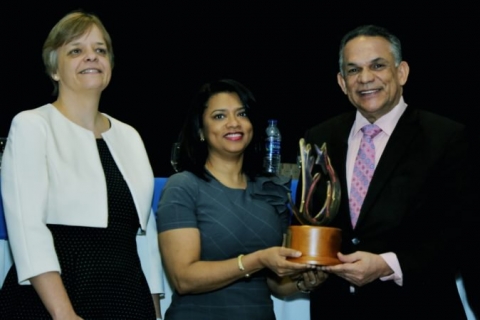 Doctor Hugo Mendoza Pediatric Hospital received the National Award for Quality 2017, granted by the jury of that award, and organized by the Ministry of Public Administration (MAP).

The award ceremony of the National Prize for Quality in its XIII edition was headed by Ramón Ventura Camejo, holder of the Ministry of Public Administration (MAP), the ambassador of the Federal Republic of Germany in the country, Sabine Bloch, and the executive director of the Ibero-American Foundation for Quality Management (FUNDIBEQ), Juan Martín Cuesta.

In the keynote address, Ventura Camejo called to break down the walls of pessimism in the Dominican Republic, because there is a part of our population that remains pessimistic and does not recognize the success and progress that have been achieved.

The minister also highlighted the importance of the Prize, which has been strengthened throughout this decade, is valid under Law No. 41-08 of Public
Duty, and “which is in effect the concrete manifestation of the science of the Administration to the Public Sector.”.

The official highlighted the efforts of the evaluators who verified the reports of the entities that applied for the Award, and thanked the jury for its work; its decisions, the speaker noted, are not subject to appeal.

The gold medals of the 2017 National Quality Award went to the National School of the Judiciary, the Pensions Superintendence and the National Energy Commission.

In addition, eight public institutions were awarded the Silver Medal: the Administrative Ministry of the Presidency, the General Comptroller of the Republic, the Electric Distribution Company of the North (EdeNorte), Area VI Health Management of Monte Plata, the Superintendence of Electricity, the Superintendence of Health and Occupational Risks (SISALRIL), Pastor Abajo Technical High School of Santiago de los Caballeros: and the Flor del Campo School of Licey al Medio, Santiago de los Caballeros.

Fifty-five entities vied for the awards of the XIII National Prize for Quality and Recognition of Promising Practices, on this occasion, from the Education, Regulatory, Energy, Health, Justice and Water sectors.

In this XIII edition of the Prize, the jury in charge of selecting the winners of the awards was made up of representatives of the Association of Industrial Companies of Herrera and the Province of Santo Domingo (AEIH), the Dominican Institute for Quality (INDOCAL), Strategic Plan of Santiago, of the Association for Development Inc. (APEDI), of the United States Agency for International Development (USAID), of the Chamber of Commerce and Production of Santiago, of the National Association of Young Entrepreneurs (ANJE) ), the Institutionality and Justice Foundation (FINJUS), the National Competitiveness Council (CNC), the newspaper La Información and other organizations.