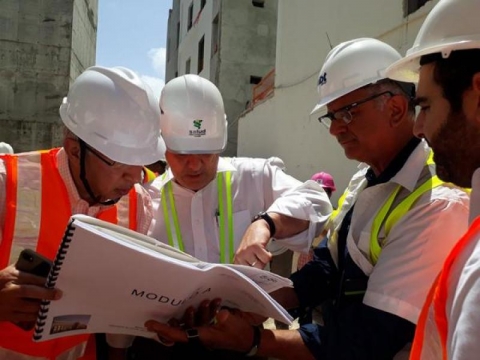 The new hospital facilities will include nine operating rooms
On a tour of the facilities, the Director of Social Security, Alfredo Martiz, and the Minister of Health, Miguel Mayo, were both present.
The construction of the new facilities at the Manuel Amador Guerrero Hospital, in the Province of Colón, is now 40% complete. The hospital is to be completed at the end of 2018.
This information was made known after a tour of the facilities by the Minister of Health, Miguel Mayo, and the Director of Social Security (CSS), Alfredo Martiz.
Mayo said that when the new hospital is ready, the number of available places for training new doctors will be increased.
“It is important to understand the progress of the new general hospital and to know how new solutions will be given to the population, which needs them so, by having a structure with enough space for surgeries, child delivery, an emergency room, laboratories, and medical training. This is yet one more example of the beneficial work that is done by the Ministry of Health (MINSA), CSS, and the National Government,” noted Martiz.
According to Mayo, the possibility of performing cardiovascular operations in the new facilities is being evaluated, as there will be nine completely new operating rooms and an intensive care ward.
The new hospital will also feature an emergency room, neonatology, hemodialysis for 30 patients, a nursing area, as well as 400 beds for inpatient care and new, up-to- date equipment to benefit more than 240 thousand inhabitants.